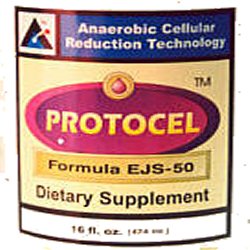 Protocel® is a unique liquid formula, and is one of the easiest and least expensive alternative approaches to cancer, yet may be one of the most successful. Protocel is non-toxic and, because it is so easy to use, is often ideal for administering to small children with cancer or the elderly. It was developed by a chemist to interfere with the anaerobic functioning of cancer cells. The fact that cancer cells obtain their energy primarily through anaerobic means (glycolysis) was proven in the 1930s and 1940s by two-time Nobel Prize-winner, Otto Warburg. Since all healthy cells in the body use aerobic functioning, Protocel leaves healthy cells unharmed. In 1990, the National Cancer Institute tested this formula (under its previous name of Cancell®), and the results showed it to work better than chemotherapy on a large variety of cancer cells lines.

The first Cancell-like formula was called Entelev and was developed by a chemist, James Sheridan of Rosell, Michigan. Currently, the brand names Cantron and Protocel are the only Cancell-like products available. Although Sheridan was a researcher at the Michigan Cancer Center, Sheridan was not a medical doctor. This may be one of the reasons the medical profession has offered so much resistance to Cancell. There is even a name for this resistance: professorial blockade. Another reason for this resistance may be due to the fact that Cancell is not only anticancer it is also antiviral. It is also the most complete and the strongest antioxidant ever tested. Since his original formula the following names have been used: Sheridan’s Formula, Jim’s Juice, Crocinic Acid, JS-114, JS-101, 126-F, Entelev, Cancell, Cantron, and Protocel.

Although the ratio of ingredients of Cancell-like products has changed slightly over the years, the ingredients listed on the labels of Cantron and Protocel are: tetrahydroxyquinone, rhodizonic acid, sodium, potassium, croconic acid, catechol (or pyrocatechol), triquinoyl, leuconic acid, inositol, and copper. The Protocel label also lists “mineral and trace elements” which are at a level of no consequence.

Cancell (Cantron and Protocel) work by reducing the ATP energy (adenosine triphosphate) in each cell of your body. (This is also one of the cancer fighting effects of Paw Paw and Graviola.) ATP is the abbreviation of Adenoside-tri-phosphate. The three phosphates are attached to the sugar component. Releasing two phosphates from the sugar, results in energy for the cell. Our cells have an electrical potential that effects how the cell processes energy producing substances (mostly blood sugar and oxygen) from our blood supply

By reducing this voltage level from 70 to 110 mv to something in the 50 mv region, normal cells can still function. However, cancer and viral cells cannot process energy at this low voltage level and start to starve. The process of starving is a slower process than being poisoned which is why Cancell works slower than chemo and why there was a dramatic reduction in the weight of tumor cells in the two day NCI test of Cancell, but only a small number of dead cells. Had that test run longer, all the tumor cells that showed such dramatic weight reduction would have starved to death.

Complement all Procel treatments with a The Professional Rife Machine, Version 3 Machine.