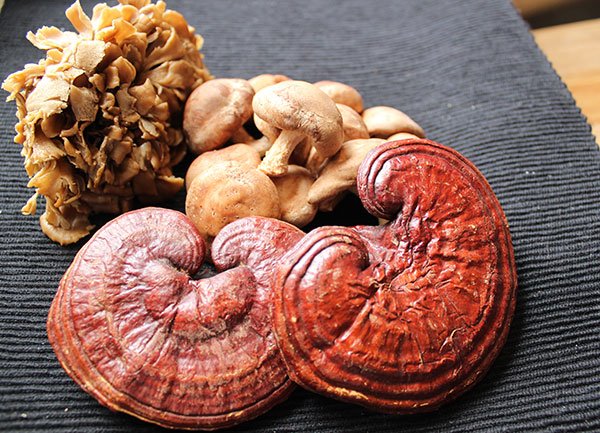 There are a number of mushrooms that appear to help the body fight cancer and build the immune system – Shiitake, maitake, reishi, Agaricus blazei Murill, and Coriolus Versicolor. These mushrooms contain polysaccharides, especially Lentinan, powerful compounds that help in building immunity. They are a source of Beta Glucan. They also have a protein called lectin, which attacks cancerous cells and prevents them from multiplying. They also contain Thioproline. These mushrooms can stimulate the production of interferon in the body.

Extracts from mushrooms have been successfully tested in recent years in Japan as an adjunct to chemotherapy. PSK is made from the Coriolus Versicolor. Maitake mushroom extract is PCM4.

A number of mushrooms and fungi have been shown in various studies to contain substances (mostly complex polysaccharides) that stimulate the body’s immune system (particularly its T-cell lymphocytes, macrophages, and natural killer cells) to destroy cancer cells, lessen the side effects of chemotherapy and radiation therapy, and combat viral infections. In some instances, tumours have been entirely eliminated. Most of these mushrooms have long been used in traditional Chinese medicine, dating back to at least 100 AD, and have been eaten as food for thousands of years in the East. Among the world’s edible mushrooms, shiitake are second in popularity only to the common button mushroom (Agaricus bisporus).

Six species are of particular interest: reishi (Ganoderma lucidum), shiitake (Lentinula edodes), maitake (Grifola frondosa), Cordyceps sinensis, Trametes or Coriolus versicolor, and Agaricus blazei muril (ABM). The latter originated in Brazil, but has been cultivated in Japan since 1965, where it is known as Himematsutake. Since at least the 1960s, a considerable amount of scientific research has been and is being conducted (especially in Japan and China) into the anti-cancer substances found in these six mushrooms.

Medicinal mushrooms are available commercially as dried powdered whole mushroom, as dried extract, or as liquid extract. Depending upon your local climate, it may also be possible to grow them for yourself. Extracts can be made in warm water over a period of 2-6 hours, or in hot water over a shorter period. A few manufacturers first use hot water, and then alcohol, to maximize the volume and variety of substances extracted. Products can be made from the mycelium and/or from the fruiting body, between which there is a difference in the level of active anti-cancer substances. Which extraction method is best is currently difficult to determine, especially in the absence of data from laboratory trials. The best method of extraction may even vary from one mushroom to another. Growing methods can also result in considerable variations in the quantity of the active substances present. But again – despite all the assertions of manufacturers and other ‘experts’ – there is minimal published data on which to base any decision. Having reviewed the literature (often in confusion!), I suspect that extracts using both water and alcohol are probably best. This is also the form used by both Dr Julian Kenyon of the Dove Clinic in the UK and Dr Etienne Callebout of Harley Street, London.

I guess that until there is standardization and each manufacturer measures and publishes the levels of active ingredients in their products (an expensive procedure), there will always be uncertainty over quality. Presently, many manufacturers actually play on this uncertainty when promoting their own particular brands, something that they could eliminate by publishing the relevant data. And until there are full scale clinical trials, dosage will remain a matter of informed guesswork. Personally, I am using the extracts from mushrooms grown and processed by Fruiting Bodies, at their place in Wales.

A number of extracts of the active compounds found in shiitake mushrooms are sold as proprietary products. These include lentinan (shown in trials to stop or slow tumour growth) and eritadenine (thought to help in the reduction of blood clots, and to lower cholesterol by blocking the way cholesterol is absorbed into the bloodstream). Another product – active hexose correlated compound (AHCC) – a proprietary extract prepared from several species of medicinal mushroom, including shiitake, is claimed to effect inhibit tumour growth and to lessen the side effects of chemotherapy. However, full details of the mushroom species used and the method of preparation are not disclosed by the producers, and most of their claims relate to the properties of medicinal mushrooms in general, rather than AHCC in particular.

Other proprietary mushroom compounds, including grifolan (from maitake), schizophyllan (from Schizophyllum commune) and SSG (from Sclerotinia sclerotiorum), are available in Japan, where lentinan and schizophyllan have been approved as anti-cancer drugs. It is worth noting that many of the animal and human clinical studies of lentinan have been made using an injected form. The efficacy of lentinan when taken orally remains uncertain.

Occasional side effects seem to be restricted to diarrhoea and bloating, which generally goes away after a few days. Allergic responses affecting the skin, nose, throat, or lungs have also been reported by some people.

Note that Agaricus blazeii contains a small quantity of carcinogenic agaritines, which are metabolized by the body into highly carcinogenic derivatives. These can be removed from A. blazeii extracts by specialized processing without adversely effecting its medicinal properties, but not all manufacturers take this step. So before using A. blazeii, it is worth getting clear feedback from the producers concerning the level of agaritines in their A. blazeii products. Incidentally, the commonly consumed button mushroom (A. bisporus) and others of the family (e.g. field and horse mushrooms) also contain agaritines.

An interesting derivative of the above mentioned Shitake mushroom is Arabinoxylan. An ingredient of the commercial “BioBran MGN-3”; a short-chain polysaccharide formed by the breakdown of rice bran by enzymes from the shiitake mushroom. It has been shown to boost the immune system by increasing the activity of natural killer (NK) cells and other lymphocytes (B- and T-cells), which can identify and destroy cancer cells. However, there is little clinical research to show that MGN-3 reduces the size of tumours. It is therefore recommended as an adjuvant treatment for those undergoing chemo- or radiotherapy, or in conjunction with surgery. No side effects or incompatibility with other treatments have been reported, and its effect does not diminish with time.